Assassinated Fathers:
A New Chapter in the Lincoln, JFK, and King Story 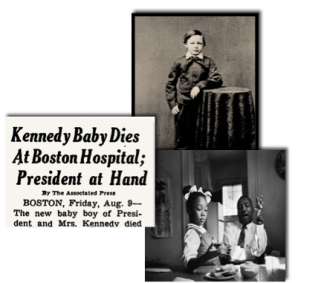 “A fuller portrait of Abraham Lincoln, John F. Kennedy, and Martin Luther King Jr., begins with this book. A greater understanding of their children’s plight has its start in these pages. And the writing of American history may never be the same.”
—LFB

Taken together, and by far, Lincoln, JFK, and King are the most written about public figures in our history. Yet they have been written about from nearly every conceivable angle except for one. There is extremely little about them as fathers.

Did it matter? At Gettysburg, Lincoln spoke more like a grieving father than a sitting President. But that’s hardly known. JFK made the fate of children a priority during the Cuban Missile Crisis. None have added that to the overworked analyses of the Cuban Missile Crisis. King mentioned his children twice at major junctures in the Civil Rights Movement. Why then? And why has no one figured his children into King’s philosophy and motivation as a civil rights leader?

Only two books focus on Lincoln as a father; none exist for JFK and Dr. King.

Their children also figure in the book. They were treated in equal measure with great deference and with persistent disappointment. None, it seemed could measure up to their fathers. Though wished for, none replaced their fathers on the national stage.  Despite this, each child became both the defender and promoter of their father’s legacies. None would have a life of their own.

The information and perspective are new.

Nearby Star:
The Story of Legendary Character Actor Pat Hingle
(An Authorized Biography)

Pat Hingle had more than a half-century of distinguished work in theater, film, and television. To the current generation of movie fans, he is perhaps best-known as Commissioner James Gordon in the first four “Batman” films.

Hingle starred in the original Broadway productions of Tennesee Williams’ Cat on a Hot Tin Roof and William Inge’s The Dark at the Top of the Stairs. The latter play earned him a Tony Award nomination. Hingle also played the title character in Archibald MacLeish’s Broadway hit J.B., in which he won both a Tony Award and a Pulitzer Prize (1958). He starred in, among dozens of other Broadway productions, Arthur Miller’s The Price (1968).

In film, he worked and became friends with a host of actors including Marlon Brando, James Dean, and Clint Eastwood. He played Sally Field’s father in Norma Rae and Warren Beatty’s father in Splendor in the Grass. He also played the bartender who needles Marlon Brando about his former prize-fighting style in On the Waterfront. He was the sadistic crime boss who terrorizes the Anjelica Huston character in The Grifters.

Though selected for the role of Elmer Gantry in the film of the same title, (which helped launch Burt Lancaster’s career), Hingle had a near-fatal accident. During a year’s recuperation, where he had to learn how to walk again, he decided he didn’t want to be a

star. Instead, he wanted to be a character actor. He wanted to be in various roles. He didn’t want to be typecast or a superstar. Hence the title, Nearby Star.

Character actors are the unsung heroes of Hollywood. We see in many movies, know their face, but can’t quite remember their name. Pat Hingle is one such character actor that should be remembered.

This gospel was fictitiously discovered in 1945 when the real-life Gnostic Gospels were found.  The gospel has remained “hidden” until now–perhaps a most propitious time for its appearance.

Written by a (fictitious) follower of Jesus who wants to remain anonymous, this female apostle says that the male-dominated church hierarchy got it all wrong in determining the final draft of the New Testament. For one thing, they excluded women—except when they couldn’t get away with it, such as the women the base of the cross or when they went to the empty tomb—when the male apostles were hiding in fear of being associated with Jesus.

This female gospel writer also contends that almost all the humor in Jesus’ ministry was left out. “Jesus had a rare sense of humor,” she writes, “and would really burst out in laughter when—mostly the men—teased him. A classic was the “alleged” exchange between Anna, Jesus’ grandmother, and Joseph.

“Where is the gold, frankincense and myrrh, Joseph,” Anna grows.

Joseph would shrug, providing her with the opening she needed. Anna would bless herself, lamenting, “Oy vie, we could’ve sent him to rabbinical school!”

But the biggest mistake of all, says the authoress, is that “the church hierarchy got the message all wrong, and that is the reason for all the anguish and sorrow ever since.” Not only did the Christian world get the message wrong, so did, to varying degrees, other faiths. Jesus didn’t die for our sins. His ministry was to show that each human being had to sacrifice and go through the ordeal he had gone through.

One other characteristic worth mentioning is that the writer is a psychic and takes on the future arguments of Friedrich Nietzsche, Albert Camus, Dietrich Bonhoeffer, and Teilhard de Chardin and key church documents and pronouncements. She has an apocalyptic vision of the contemporary world, but it is far different than that found in the New Testament. It’s something else, she says, “that the men got wrong.”