This is the story of an old first-generation Italian immigrant and her newly-minted, third-generation Ph.D. grandson. By force of circumstance, he goes to live with her the summer she is to die. An extremely private woman, she is ready to talk about the family’s secrets, challenges, and hopes. Joey, the grandson, is tired of books, scholarly learning, and has lost his passion to be a poet. It is as if the stars are perfectly aligned: She is ready to talk—and he is ready to listen.

The play’s director, Terry Theodore, said that the protagonist (Joey) In the Womb of the Moon is an archetype whose personal quest becomes a symbolic exploration of the American collective unconscious. The character and this play effectively fuse the particular and the universal…The moon, a classic reference in measuring time, is also symbolic of the unconscious.”

The play was workshopped at the Raft Theatre, New York City, Previous iterations resulted in being a finalist for The David James Ellis Memorial Institute Award, a finalist in the Forest A. Roberts/Shiras Playwriting Institute national competition, and a semi-finalist in the East/West Players competition in Los Angeles. The play started off as a short story and earned a national writing award. In the Womb of the Moon was a production of the Theater Department, University of North Carolina Wilmington, Wilmington, NC (2007). WGA: R22345 Play Excerpt (PDF) 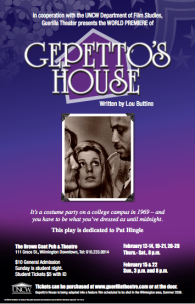 The setting is a costume party on a college campus in 1968—the year America came apart. The main conflict in the story is between two former best friends who split apart because of the Vietnam War. One, Gary, was a black First Lieutenant in Vietnam; the other, Louie, went underground in order to avoid the draft.

The actors must be what they’ve come as in their costuming, e.g. a fairy princess, a wizard, etc. They must try to talk like the character, and believe as they would do, until midnight. It’s called Beaux Arts Ball, an annual event at the small college in New England until it was interrupted by the war. The school—specifically the art department—is attempting to reignite the passions and imagination of the experience.